The 3224 yard Canyon nine features a traditional layout tree lined throughout. Recently, many of the holes on the original nine have been redesigned. The changes made to the Canyon nine now provide three par 3’s, three par 4’s, and three par 5’s, changing the par from 35 to 36. Although relatively small by today’s standards, the four new green complexes are all larger than the greens which they replaced. Short game precision is still a huge asset in scoring well on the Canyon nine. The original nine is nestled in the natural terrain surrounded by a thick forest of Ponderosa pine, oak, and Black Hills spruce trees.

In 1988, the Spearfish Canyon Golf Club became the first 18-hole golf course in the Northern Black Hills. Unlike the original nine, the Lookout nine employs a modern design with an oak-laden creek bed which enhances natural definition. The 3529 yard links-style layout features rolling hills and large greens, producing different challenges from those of the original nine. 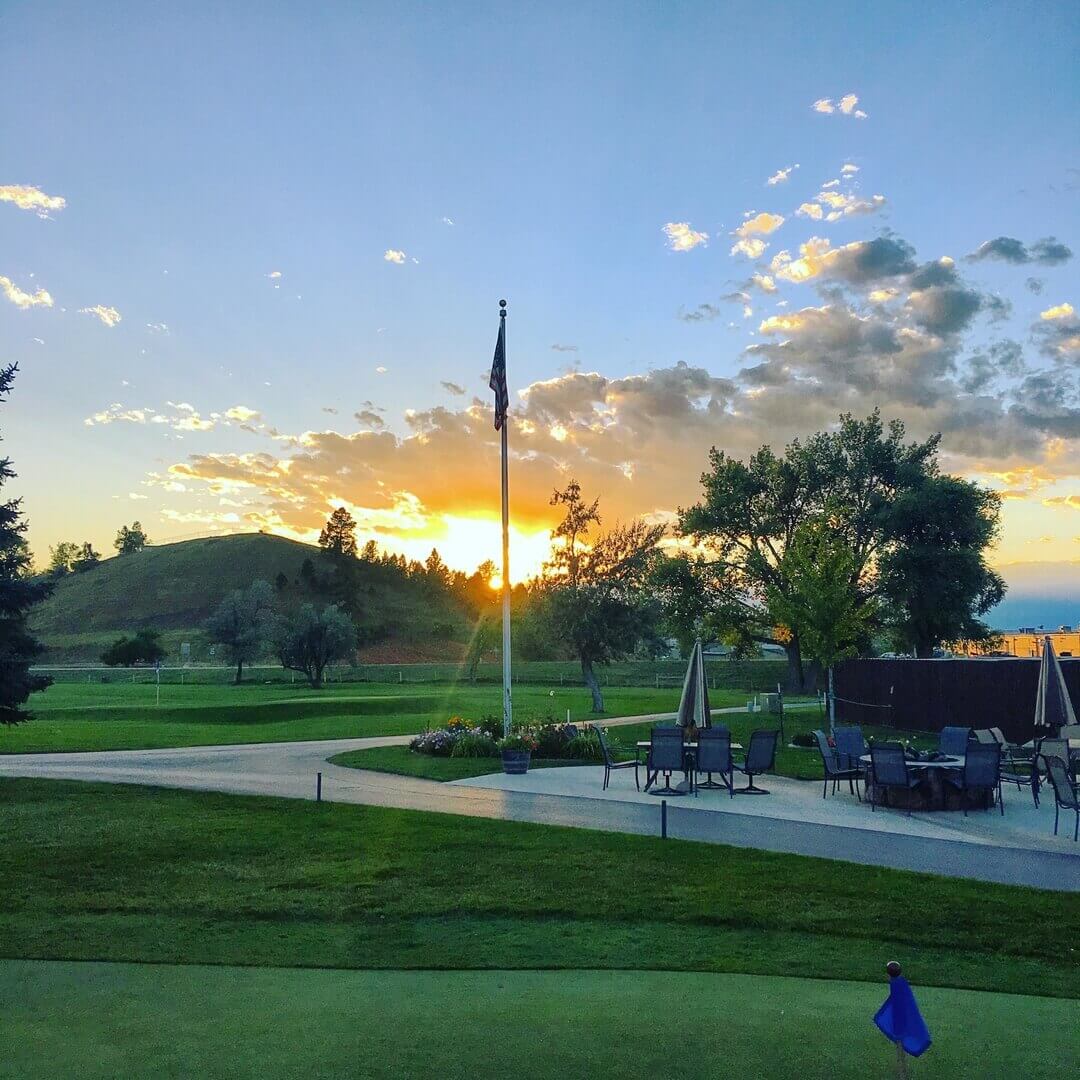 Don’t let the yardage fool you. Although driveable, this short par 4 is very tight greenside and visually intimidating from the tee, with native area up the right and trouble over the hill on the left.  Just remember there is a lot of room side-to-side. A tee ball placed just left of the lone Ponderosa pine tree will play nicely. This green is one of the flattest on the entire golf course. Be aggressive with your approach as the green is wide open.

Take about 10% off your yardage as this hole plays very downhill. Although virtually unprotected except for the pot bunker, this green does have a moderate back to front slope and makes an up and down somewhat difficult. Be careful not to hit it over the green as chipping onto a downslope is never simple.

Saddle up partner. If you’re going to reach this green in two shots…you’ll have to get on your horse…twice. Although under 500 yards in length, this par 5 plays much longer. Fortunately, it usually plays downwind. Very straight-forward hole. Pay attention to the hazard on the right at about 150 yards from the green and the bunker short/left greenside. Add 10% to your approach as the uphill slope is steeper than it appears.

This long par 4 employs a sharp dogleg about 150 yards from the green. Place your tee shot up the left center of the fairway and be sure to hit it solid. The approach to this green is clear-cut, just pay attention to the fall off of the green to the left, right, and front. This green is pretty level, with some subtle breaks not easily seen.

The reason this hole is visibly intimidating is because it should be. It is the most difficult hole on the front nine. Out-of-bounds up the left side and penalty area up the right side. The fairway slopes gently from left to right making it easy for the familiar slice to get away from you. On your approach, pay attention to the white stakes left of the cart path. The green is wide open but quite narrow side to side and has a crown on the left making up and downs lots of fun.

This par 5 is a three-shot hole for most golfers. Favor the left side of the fairway on your tee ball. Depending on the depth of your tee shot, you may be able to either go over the trees for your second or shoot the gap. Just be sure to avoid the small grove of ash trees on the right side about 100 yards from the green. Add a few yards to your approach as it plays uphill. This green is pretty level, with some subtle breaks not easily seen.

Although somewhat level, this hole does employ a forced carry over a natural valley. The sharp upslope leading into the green usually prevents a tee shot from bounding forward. This green is very flat with the exception of the right edge. You can be very aggressive with your tee ball as the green is wide open. Be careful with the fall off to the left as the native grass is quite deep.

Although not a super long par 4, this hole does play uphill. The hole is framed by cedar trees up the left and right, and doglegs at about the 150-yard marker. The big hitters can pick a line over the left cedars and let it fly. Add a few yards to your approach as it plays uphill. Although a very flat green, subtle breaks make putting a quandary at times.

Heading southeast, this hole generally has a helping wind and the downhill slope makes it play a lot shorter than its yardage. Play your tee ball down the middle toward the barber pole.  Pay attention to the fall off to the left and the white stakes to the far right. Take about 10% off your approach as it is quite downhill. Be aggressive with your approach as the green is just asking to give up a birdie.

This lengthy par 5 is one of the toughest holes on the original 9. Framed by a penalty area up the left side and mature Ponderosa pines on the right, a tee shot in the fairway is a premium. The subtle dogleg at about 225 yards from the green can be bypassed by a long tee ball up the right center and an aggressive second toward the green. If forced to lay up, pick a comfortable lay-up yardage, as your wedge shot will need precision. Be sure to keep the ball below the hole on your approach and take special care to not hit it over the green.

Although short, this par 3 does not lack in character. The green is narrow front to back which requires fly-yardage control. The pot bunker protecting the center of the green is a very difficult position. Long right is also an unenviable spot as the green runs subtly away back to front. This hole employs a modern green complex design with a slightly larger putting area than the norm at SCGC. Holes 11 thru 15 were the focus of our golf course redesign and were opened for play in June 2020.

This par 5 is a birdie opportunity during many rounds. Although short by present-day standards, this hole requires precision. A tee shot must be placed in the left fairway for a second shot angle at the putting surface.  With a forced carry over the creek short of the green and penalty area left greenside, approach shot control is paramount, whether it be a lengthy second shot or a short wedge for your third. In an effort to offset the relatively short yardage for a par 5, this green complex is small and severe by design.

Don’t let the yardage fool you, this par 4 is straight uphill. The classic risk vs. reward hole…be very careful with your line if you attempt to drive the green. If laying up, do so to a comfortable yardage as this green is very narrow front to back and sits at a difficult angle. There is almost nowhere to bail out on this hole as the greenside bunker is a difficult spot and reaches well out into the approach. Favor the front third of the green on your approach, because long is absolute jail. This hole employs a modern green complex design with a slightly larger putting area than the norm at SCGC, and the back to front slope is far steeper than it appears.

This par 4 is the number one handicap hole on the back 9. Although downhill the entire way, it usually plays into the prevailing wind, making the 430-yardage legit. Approach shot control is extremely important. A forced carry over the creek short of the green, penalty area left greenside, and native area right greenside all frame this difficult green complex. This green is the largest on the back nine and offers many challenging hole locations.

This green may look familiar as it is the former sixth green. The hole is now a lengthy par 3 approaching the surface from a slightly different angle than before. The prevailing wind is again an issue here as it can make the 180-yard hole play much longer. This green has an aggressive false front and false edge, and is very flat on the top, making it difficult to hold your approach. Play a yardage to the front of the green as immediately behind the surface is a group of Ponderosa pine trees.

The yardage is misleading as this par 4 is straight up the mountain, making this the second toughest hole on the back 9. A sharp dogleg at the 150-yard marker can only be cheated by the longest hitters. A tee shot in the fairway is a premium as the approach is very demanding. This green utilizes a very steep slope back to front, making an up and down prospect very unlikely. Be sure to keep the ball below the hole on your approach and take special care to not hit it over the green. Take caution with your lag putts as no one wants a four-footer on this hole.

One of the best views on the golf course. This hole can play many different yardages and can provide some interesting theater as your rounds of golf near their end. Although very small, this green is quite flat and allows for an aggressive approach. The greenside bunker protects against falling over the hill to the left but is a difficult up and in. Pay special attention to the canyon winds as they tend to affect the golf ball more than you would assume.

A solid par 5 finishing hole. What you see is what you get. Place your tee shot anywhere to the left of the bunker and you will be fine. Be careful not to leave it to the right as the penalty area meanders up the right side.  Bombs away for the big hitters…aim at the big Black Hills Spruce left of the barber pole, just be careful of the white stakes up the left. Be sure to keep the ball below the hole on your approach and take special care to not hit it over the green. Back to front slope on this green is as severe as anywhere on the golf course.